Tribute to Msgr. Foy from the UK 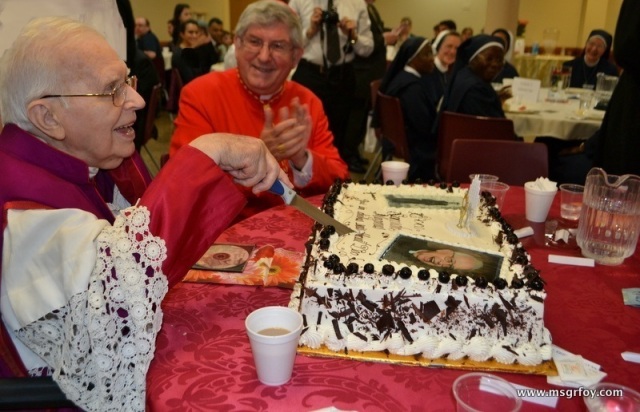 Msgr. Vincent Foy was ordained a priest in 1939 and served the priesthood for 78 years.

The oldest and longest-serving priest in the history of the Archdiocese of Toronto died March 13 at age 101. In his 78th year of priesthood, Msgr. Vincent N. Foy was proud of his longevity, his loyalty and his defence of Catholic teaching.

In a Catholic Register article last December, Msgr. Foy wrote about being “perched on the precipice of eternity” as he recounted his long career.

Msgr. Foy served as a Eucharistic minister at two 1978 papal funerals, those of Pope Paul VI and Pope John Paul I. He also served at the first Mass of St. John Paul II.

When Msgr. Foy was ordained a priest in 1939, he fulfilled a promise he had made as a 7-year-old boy. In 1922, his mother was close to death, and young Foy promised God that if she survived, he would do all he could to become a priest. She lived.

Doing all he could became Msgr. Foy’s lifelong touchstone.

After graduating from St Augustine’s Seminary in 1939, he was sent to study canon law at Laval University.

Armed with a doctorate in canon law, he was named archdiocesan vice chancellor and secretary to the Toronto Archdiocesan Matrimonial Tribunal.

When the tribunal became the Toronto Regional Marriage Tribunal, he became defender of the bond and judge.

In 1957, Pope Pius XII named the priest a prelate of honour, earning him the title of monsignor.

When Montreal Cardinal Paul-Emile Leger convoked the first meeting of the Canadian Canon Law Society in 1965, Msgr. Foy was among the founders.

But Msgr. Foy’s long priestly career was not confined to canon law. He served the archdiocese as a pastor and part-time director of catechetics.

After he retired in 1979, he campaigned for pro-life issues and served as chaplain for several groups.

This entry was posted in BIOGRAPHIES & OBITUARIES, POST MORTEM. Bookmark the permalink.