Kidding around with Fr. Ted Colleton in 2007. 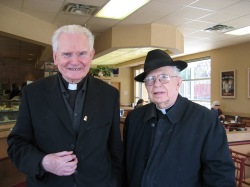 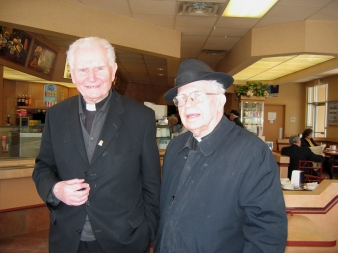 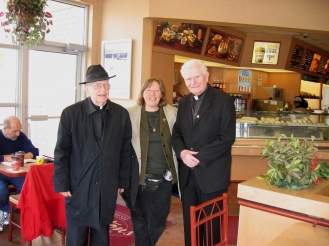 We bumped into a former parishioner. 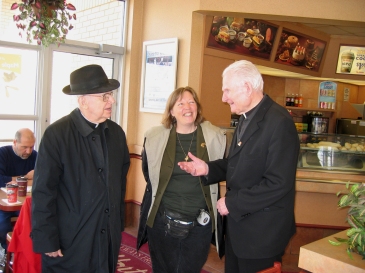 I met Fr. Ted Colleton CSSp when he used to help out at St. John’s when I was the pastor there.  His congregation, the Spiritans had a house nearby. We shared common interests and quickly became close friends. I visited him and the late Fr. Edward Graham at their motherhouse. We used to go out for dinner occasionally.

Fr. Ted used to joke: “There were two brothers whose last name was Divine.  They were afraid they were going to be fired.  They worked for a family.  One brother said to the other:  We’re safe, I heard the family last night saying ‘May the Divine Assistants remain always with us.'”  Father Ted would also say: “I was born on July 20, 1913.  I am happy to say that my mother was there.”

We both lived in La Salle Manor retirement residence for clergy and religious for a few years. Fr. Ted, a lively Irish priest, spent many many hours in the chapel praying. He did not have a TV in his room.  He enjoyed entertaining and doing card tricks – he could find the card you selected. He spent several decades as a missionary in Africa until they “kicked him out of the country” for attacking polygamy.  The head of Kenya had two wives and was not impressed.  After delivering his message, Fr. Ted was told to get out of the country and did not even have time to pack his bags.

He once told me that a woman on a bus in Africa remarked to him:  “My you priests are smart learning Swahili”. Fr. Ted replied: “Well I’ve been on the bus for a whole hour.”

Back in Canada, he became involved in leading Nightwatch – an all night Eucharistic Adoration vigil held on First Fridays of the month to pray especially for vocations to the priesthood.  Nightwatch took place at floating parishes in the Archdiocese of Toronto.  Fr. Ted offered opening and closing Masses, gave a short reflection every hour on the hour throughout the night, led hymns and prayers and invited adorers who needed refreshments to the church hall during the vigil.

Incidentally, although unfortunately Nightwatch was later discontinued, it is encouraging to see that pre-ordination Eucharistic Adoration prayer vigils are taking place from 6pm-midnight in the Archdiocese of Toronto on Friday, April 29, 2016, the night before upcoming Ordinations on April 30:

Fr. Ted also became avidly involved in the pro-life movement, going to rallies, raising money speaking and selling his books “Yes, I’m a Radical”, “Yes I’d do it Again” and “Yes, I’m still a Radical.”  One time he was arrested for “mischief” for pad-locking the gates to the Morgentaler abortuary shut.  I visited him in jail in Mimico when he got arrested another time and held prisoner for months for peacefully praying in front of an abortion mill.  He was very busy there enjoying doing card tricks and ministering to the prisoners.

One time Fr. Colleton delivered a pro-life homily in Holy Name church in Toronto and was attacked. In October 1997, I wrote “A Privileged but Sad Day at Holy Name Church in Toronto – Father Ted Colleton C.S.Sp. Comes with the Gospel of Life”.  This was a response letter to the dissenting Catholic New Times’ attack on Humanae Vitae and Fr. Ted:

A Privileged but Sad Day at Holy Name Church by Msgr. Vincent Foy

I attended his 90th birthday cruise party on Lake Ontario in 2003.

Fr. Ted was a regular columnist for the Interim pro-life, pro-family newspaper.  The Interim wrote about him in 2003:  Fr. Ted “has certainly known setback in his long life and priesthood. But he continues to find inspiration from his priestly calling. Call him sentimental, but Colleton still gets misty-eyed at these words he wrote in 1990, on the occasion of his 50th anniversary as a priest: ‘For half a century, I have daily stood at the altar of God and offered the Holy Sacrifice of the Mass, raised my hand in absolution over more repentant sinners than I could ever count, poured the waters of baptism over the heads of babies without number, preached the Gospel in Ireland, England, Africa, the United States and Canada and anointed the foreheads of those who were within minutes of meeting God face to face. And through the teaching of the Church, I know that, in spite of my unworthiness, all these actions were not only valid but fruitful. And although I was only the instrument of the Church, it is consoling to realize in the evening of life that I was chosen to be such an instrument. In this period of Church history, when the glory of the priesthood has been somewhat overshadowed by the clouds of scandal and doubt, I want to affirm this fact: if I had another life to live, I’d do it again.'”

Yes, I’d do it again

His memorial card mentions there is a Fr. Ted video.  This tribute is called “The Lion in Winter” and well worth watching.  This video is included at the bottom of the page in the link below: