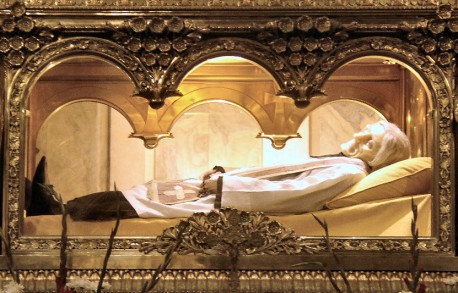 “And I will give your pastors according to My own heart, and they shall feed you with knowledge and doctrine.”  Jeremiah 3:15

This prophecy of Jeremiah was admirably and remarkably fulfilled in St. John Vianney, the Cure of Ars in France (1786-1854). His long priesthood was spent in the confessional, in prayer, mortifications and good works. He is the patron saint of parish priests; and was declared to be the patron saint of all priests, during this Year of the Priest, 2010. One cannot read his biography or his catechetical instructions without being deeply moved. This Year of the Priest seems a fitting time for me to reflect on my pilgrimage to Ars.

My yearning to make a pilgrimage to Ars dates back to 1932, the year I entered St. Augustine’s Seminary in Toronto to study for the priesthood.

At that time in the Seminary there was at the south end of the main floor, on a small pedestal, a life-sized statue of St. Jean Marie Vianney, the pastor of Ars (Cure d’Ars). Very often after night prayers seminarians would kneel to say a brief prayer before retiring.

Inspired by this statue, I borrowed from the Student Library everything I could find on the Cure d’Ars. There was the classic biography by Trochu, who not only wrote from personal experience but drew from the Acts of Canonization to give the recollection of many concerning the saintly pastor. There was Henri Gheon’s “The Secret of the Cure of Ars” and one or two other biographies.

That year I was in Room H in the basement of the main building of the Seminary. In 1932-1933 the Seminary was so crowded that some students resided two in a room. In the summer of 1933 additional rooms were built in the basement; rooms A to Z. There were well over 190 seminarians.

In the books on the Cure there was detailed mention of the attacks on him by the devil, whom he called “Grappin”. In the period I was reading about these attacks, I began to hear or imagined some rather strange noises at night. There was what sounded like a rustling of paper or a plucking of a bed spring. Was I being attacked by “Grappin”? One night I woke up to see two eyes staring at me, very close to my face. I jumped out of bed and turned on the light to see a mouse scurrying across the floor. There was my “Grappin.”

I should mention here an event about the statue of the Cure. During the 1932-33 year two students played a rather nasty deception on one of their classmates. They observed that every night after night prayer, this classmate knelt down in the semi-darkness to say a brief prayer. On one night the classmates hurried to the statue and removed it. One of them, dressed in soutane and surplice stood on the short pedestal. When the prayerful seminarian knelt to say a prayer, the figure bowed over and said in a solemn voice “God bless you, my son.” One can imagine the frightened reaction of the victim of this prank.

During seminary years I continued with my devotion to the Cure of Ars, bought booklets on him and prayed that one day I would make a pilgrimage to his parish. It was not long after my ordination that I obtained a small statue of the Cure of Ars. Years later, I obtained a first class relic of him which is in a reliquary on my desk as I write these words.

Early in my priesthood, when I was vice-chancellor, I lived at Blessed Sacrament rectory in northern Toronto. The pastor was Msgr. Hugh Callaghan. About the mid 1940s he made a pilgrimage to Ars and sent me a postcard, still in my possession, which read: “Here is that card you asked me to send you from Ars.”

Now came my trip to Ars. A few days after the inauguration of Pope John Paul II, I headed north to Turin and then on to Lyons in France. I had read in a travelogue that there was a residence in Lyons for travelling priests but was assured at the railway station that it had been closed – so near the station I found a room in a bed and breakfast place.

The next morning at about 7:30am, I found a church nearby which was attached to a religious order. There I found an open door and received the coolest welcome I have ever received from a fellow priest. He was dressed in civvies, with no sign of his priestly state. I was dressed, as I habitually have been, in black suit and Roman collar. He said in French “Why are you dressed like that? You look ridiculous.” I explained that this was the approved dress for a priest in Rome and in my own archdiocese of Toronto. I asked if  I could offer Mass. He said I could if I could concelebrate in French; and so I did. Afterwards he quickly discarded his vestments and departed.  There were about fifteen elderly people there, with whom I stayed while they recited the rosary.

The following morning, on Saturday, I went at about 7:30am to the great Cathedral of Lyons. When I entered, the church was completely empty. It took me some time to find the entrance to the sacristy. There, about seven or eight elderly Canons of the Cathedral were vesting for Mass. They offered to let me concelebrate with them. About five or six lay persons assisted at the Mass. It was evident that in Lyons the Church had come upon hard times.

After Mass and checking out of my bed and breakfast dwelling I went to a small bus station. Some high school students there asked me to help them translate a paper into English. Then, I was on a weather beaten bus to Ars, about 25 miles away. Arriving at Ars, I was the only one to get off. I felt a great feeling of peace as I looked at the little town so famous for so many years. There was the statue of the Cure of Ars with a little boy. The inscription read in translation: “You show me the way to Ars and I will show you the way to Heaven.” That little boy, as an old man, testified at the hearing for the canonization of the Cure.

It was not a long walk to the basilica. There was the old church as it was in the nineteenth century. Built onto it was the more modern larger basilica. Next to it was the original rectory; much of it was as it was when the Cure was living. It reminded me of a large reliquary.

Inside the old church I was greeted by two elderly sacristans or brothers. They kindly showed me around. One pointed out the spot in the sacristy where Our Lady appeared to the Cure; they showed me where he heard the confessions of men in the sacristy and a confessional in the church where he heard those of women. They advised me to stay overnight at what was once a residence for orphan girls and was now a retreat house. I took their advice and was soon in a small room with only the bare necessities: a bed, chair and sink. I ate my supper with several of the elderly residents. The price was quite low and the atmosphere was of peace and kindness.

At 7:30am the next morning I went to the Basilica and vested for Mass.  One of the Brothers brought out the chalice once used by the Cure and prepared it for me. I was ushered to the Altar in the new Basilica. In front of me was the glass sarcophagus containing the mortal remains of the saint. It seemed to me that his face had a wax coating, though his incorrupt hand holding a rosary was visible. Here was the realization of a dream of long ago. I was blessed with a special fervor in offering that Mass.

The principal Mass at the Basilica, at which I assisted, was at 10am. Here it was evident that the example of the Cure had not been forgotten. There was a full church with moving hymns and music and a good homily given by the current Cure of Ars.

That afternoon I again took the bus to Lyon and then on to Paris and London, where I offered Mass at the Oratory and then home to Toronto. I have burned into my memory, with deep gratitude, the memory of my solitary pilgrimage to Ars. This Year of the Priest many other priests and countless laity will repeat an unforgettable journey to a place in France where the Faith flourishes because of a humble and holy Cure.

Published in Cinqdoos and Catholic Insight in 2010.