Fr. Richard Ward (1913-1956) was my best friend – we were both in the same class and were ordained out of St. Augustine’s Seminary in 1939. He was a very intelligent priest with a great sense of humour and died in his early forties.

When I became elderly she used to phone me occasionally, like a big sister, to see how I was doing.  Her niece Kathryn is a very fine woman and still keeps in contact with me.

The chaplain at Providence and another priest visited Gail in her room to bring her the Sacraments before she died. About a week before her death, she received a Brown Scapular with Miraculous and St. Benedict medals around her neck from my assistant.

From the time she was a teenager, Gail worked at St. Mary’s church in Toronto on Bathurst Street. She was with the pastor at St. Mary’s when he died. Then she worked at Our Lady of Lourdes parish and looked after her mother. She had been engaged to a man who was killed during the war.  She never married. She was an excellent cook, housekeeper and took care of the finances and books at the parish. 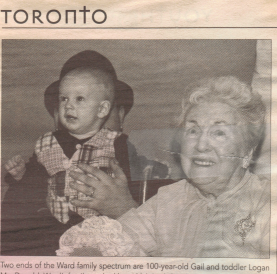 Gail’s brother Fr. Richard Ward and I took our holidays together. One time we travelled up to the Bruce Peninsula, studying wild flowers on the beach and went swimming.

He became Chaplain on the HMCS Magnificent aircraft carrier, generally referred to as the Maggie in Canadian service. It was a Majestic-class light aircraft carrier that served the Royal Canadian Navy from 1948-1956.

I drove from Toronto with my first car, a new white Ford, to pick Fr. Ward up to drive to New York together during a vacation.   The Maggie was in drydock because it needed some repairs. I heard of a shortcut down in New Brunswick where the aircraft carrier was in drydock. On the way, I hit a rock on the road which blew out the front tire and sent me in my new car right towards a tree. I knew I had to miss it. I swung the wheel around and landed upside down at a right angle to the tree. Oil poured out over my shirt. In  my pocket, I had a postcard addressed to my brother Edward. The card was ready to mail and I had written “You can have the car as soon as I get back”. My front windshield was shattered and the other windows were smashed in. I crawled out covered with oil. Thank God it did not take fire. A crowd gathered around and they wanted to know “Where is the body”.  I said: “I am the body”. They were amazed that I had survived.

We waited for the p0lice and finally I got a drive to the drydock. Fr. Richard was all packed and ready to go.  He said “Where is the car” and I told him. We left the car in charge of the Protestant chaplain on the Maggie and the two of us went by bus to New York. The doctor examined me and said ‘You are very lucky that you have no broken bones, but you have some bruises and you will likely suffer from shock within the next twenty-four hours.’ I waited for that shock, but it did not come. So we had a holiday down in New York. I had the car towed back to Toronto and was able to have it fixed for a few hundred dollars but sold it for a big reduction.  I got another car, but not right away.

A few years later, Fr. Ward was visiting his mother on mother’s day.  He invited me to go back with him to visit the convent outside of Ottawa, in Vanier, where he resided as chaplain, but I had too many appointments.

The following day, on May 15, 1965, he died when a plane crashed into the convent where he was residing as chaplain. He was also still a navy chaplain at this time.  He had been out playing cards with the Oblates and returned to the convent at 10:15pm, a few minutes before the crash at 10:18pm. I had to break the news to his mother. His sister Honey answered the door and I told her first and then we broke the news to the mother. I gave the funeral homily at St. Michael’s Cathedral and there was a full crowd. After the funeral, the head navy chaplain was crying and Mrs. Ward comforted him saying ‘Now, now, it’s God’s Will and we can’t do anything about it’.

I was pleased to find out that there is a “Father Richard Ward Park” named after him in Ottawa, Ontario.  He is considered a hero because he survived the initial explosion and then tried to get the Sisters out before there was a secondary explosion.  When plane hit there were two explosions –  the initial impact and then when the gas tank exploded. He got as far as the door and was blown out by the second explosion.  His body was in good shape, but the frame of the door pierced his backbone. Had he left without trying to help others he may have survived; but instead he died a martyr, helping to rescue others.

Since I had been busy with work, I just missed being killed in that crash. Fr. Ward was a great reader of Charles Dickens.  I had a two volume “Life of Charles Dickens” which I had loaned him. That went up in the flames.

After his death, I visited his mother occasionally.  She was a lovely person. Her husband died in his thirties.

This is Fr. Richard Ward’s memorial card.  The photo on the front was taken when he was a navy chaplain. 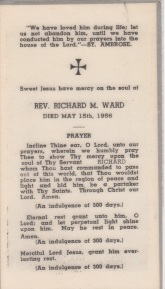 This entry was posted in AUTOBIOGRAPHY. Bookmark the permalink.