Fr. Mott was a convert to the Catholic Faith.  He was sent out to Victoria diocese in BC, where he died shortly after. He was a very nice man. 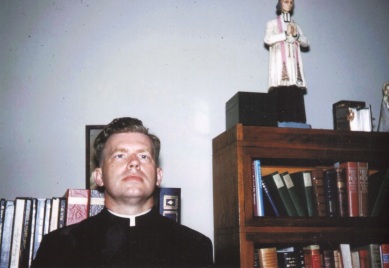 Msgr. Bernard Kyte, who was Rector of St. Michael’s Cathedral when I was there, had a brother who was a Christian Brother who taught me at De La Salle High School. He was a great tall man who was nicknamed “the Ambling Alp”. At the Cathedral, if I went into the Church to make a Visit to the Blessed Sacrament at 11pm, I would find Msgr. Kyte making the Stations of the Cross.  He and I used to go on vacations together occasionally, for example to Mexico.  One year, we went on vacation in July.  After that, in September, as a member of the Catholic School Board, he was offered a free trip to South America. He went downhill skiing in the Andes in South America and took a heart attack.  He was medically transferred to Chile and died there.  I received a post card from him that arrived after his death.  He was only sixty when he went home to God. He was a very fine priest.