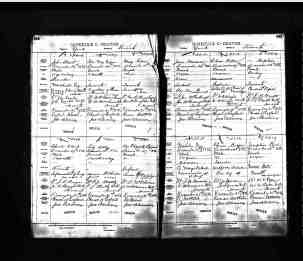 Death certificate of my grandfather Nicholas Foy, after whom I was named.  He died of pneumonia. He resided at 28 St. Alban’s Street. My aunts were Elizabeth and Babe and my uncle was John.

1881 Census: Nicholas Foy (born 1832) came to Canada by himself during the famine in Ireland. Later he brought over his brother George, who had the largest cemetery monument in Ontario constructed at Mount Hope.

This entry was posted in AUTOBIOGRAPHY. Bookmark the permalink.